Did you hear about that new restaurant on the moon? It has great food, no atmosphere! Everyone loves a good dad joke and dads love craft and seasonal beers, juicy burgers, and quality hot dogs. That has been the vision for Dad’s Pub and Grubsince its opening in Monroeville and now the local favorite has opened its doors to a second location in Braddock Hills. Unlike that moon restaurant, the new Dad’s offers down to Earth food and plenty of atmosphere. Manager and co-founder, Dan Hadley, was excited to open another Dad’s once Foli’s closed its doors and is hopeful for many more years of continued success.

How did you get started in the business?

My career in the service industry started at D’s Six Paxs & Dogzwhile I was in college in February of 2000. 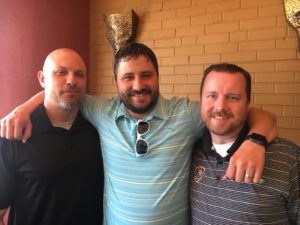 Tell us what you did prior to joining the Dad’s team?

I started out cooking and bartending at D’s while I was in school.  Once I completed my BA at the University of Pittsburgh, I decided I wanted to learn all aspects of the restaurant industry.  I quickly went into management. I helped expand the D’s brand from a 30 seat bar to a 100 seat bar/restaurant. After 6 years in Regent Square at D’s I moved into beer sales for a brief time before I was recruited to help open D’s second location.  Then after 5 years of managing the Monroeville location my fellow managers and I, Steve McKelvey and Erich Faas, had the opportunity to purchase the Monroeville location of D’s. The rest is history! 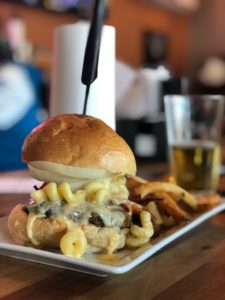 The Monroeville location has had a great deal of success, why?

I think because of the experience we offer when you walk through our door.  By no means are we a flashy business. We are working out of an old Pizza Hut, which a nice gentleman made a song about a few years back.  We try to give our guests a laid back, comfortable atmosphere paired with quality food, a nice variety of craft beer, and cocktails. To us its all about the community in Monroeville and how they have graciously supported us over the past 7 years.  We hope to create the same relationship with Braddock Hills and the surrounding communities.

Why Braddock Hills for the second location?

Steve, Erich and I are all from this area.  Erich was a Central Catholic graduate who grew up in Churchill.  Steve and I are Woodland Hills Alumni. Steve lived in Edgewood for a bit and then moved to Forest Hills.  I grew up in Regent Square. So it means a lot to us to be able to open a business where we grew up.

Are there any changes between the two businesses?

First and foremost, everything is newly renovated at Braddock Hills.  Monroeville has 40 taps and Braddock Hills has 20 taps. We do not offer as extensive a craft beer selection in Braddock Hills as in Monroeville.  We are somewhat limited with space at Braddock Hills. Although, we are hoping to expand our Braddock Hills menu. We will offer some dinner entree options as we move forward.   Other than that both businesses are very similar. One thing to do is to “like” our Facebook page for each location and keep an eye out as specials will very between each store.

What are the future plans for Dad’s?

Eventually, we would like to add an outside dining area for the Summer at Braddock Hills.  A few years from now we will also be looking into completely renovating our Monroeville store.  Our Food Truck, Dad’s Mobile Grub, will also be back in action starting April. Hopefully, we will see our guests at all of the local community events!  The guys and I would like to say thank you for the opportunity to serve this community and the neighborhoods that surround us! Cheers!